NextWhat’s Stopping You From Flying? – Poem by Khushboo Gursahani, I PUC, CMNPUC-ITPL
Sketches and ScribblesStories from ITPL

A Ticket to the Sun – Article by Anjali Manoj, II PUC, CMRNPUC ITPL

A TICKET TO THE SUN

Article by Anjali Manoj of 2PUC ‘B’

At 3.31am on August 12th, 2018, NASA launched yet another mission from Cape Canaveral, but this was no ordinary, routine mission. This was the launch of The Parker Solar Probe that is currently on its way to “touch” the Sun. It will be the closest mission ever in the history of space exploration to the surface of our closest star. The Parker Solar Probe has been in the works for quite a while now and when it does reach its destination, the Sun’s atmosphere, almost as close as 3.8 million miles from the solar surface, it will carry out tests and investigation that will revolutionize our understanding of the Sun’s corona.

A few months before every mission that NASA launches, it invites people around the world to submit their names online to be placed on a microchip that will be launched along with the mission. The same was done even with the Parker Solar Probe mission and I decided to submit our names so that our names will go along for the ride to the Sun’s atmosphere, a place that has never been explored by humanity. My love and enthusiasm for Extraterrestrial exploration is the reason why I closely follow the activities of space agencies around the world and this opportunity with the Parker Solar Probe was something that I simply could not miss! 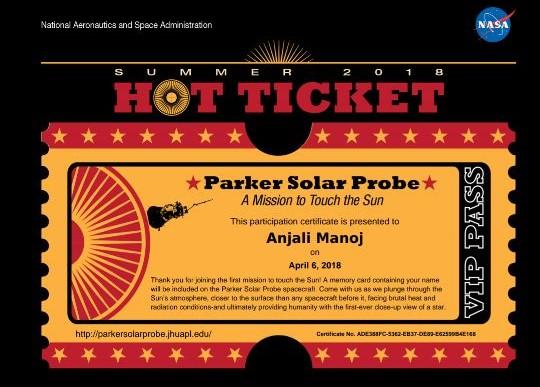