The concept of planetary boundaries came about in 2009 when a group of scientists led by Johan Rockstrom decided to research the factors that regulate the stability and resilience of the Earth. The scientists proposed quantitative planetary boundaries within which humanity can continue to develop and thrive for generations to come. Crossing these boundaries would bring about risks of large-scale destruction or unalterable environmental changes.

According to Rockstrom, the earth is being ‘squeezed’ quadruply by the following four:

By entering the disciplinary research into any of the parameters disturbed by human well-being, be it nitrous oxide, methane, land degradation, loss of species, they all show an exponentially rising accelerated growth curve from the mid-’50s, and we have come to the point where we may have to bend the curves.

Stratospheric ozone depletion
The stratospheric ozone layer in the atmosphere filters out ultraviolet (UV) radiation from the sun. If this layer decreases, increasing amounts of UV radiation will reach ground level. This can cause a higher incidence of skin cancer in humans as well as damage to terrestrial and marine biological systems.

Loss of biosphere integrity (biodiversity loss and extinctions)
We are now experiencing the sixth mass extinction of planet earth. This beautiful blue and green planet of ours has experienced 5 mass extinctions before. These have been said to be caused by volcano eruptions, asteroid strikes, climate shifts, and other natural causes. During these natural phenomenons, species extinction occurs at 1 to 5 species a year. This is called a background rate. The sixth mass extinction known as the Holocene or Anthropocene extinction is caused by humans. The extinction rate of species is 1,000 to 10,000 times larger than the background rate of previous extinctions. We are facing a future of losing 30 – 50% of all species by 2050 if we don’t act dramatically now. 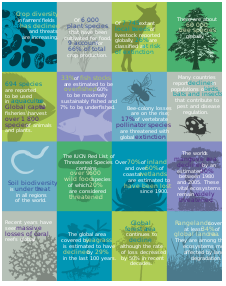 Chemical pollution and the release of novel entities
Emissions of toxic and long-lived substances such as synthetic organic pollutants, heavy metal compounds, and radioactive materials represent some of the key human-driven changes to the planetary environment. These compounds can have potentially irreversible effects on living organisms and on the physical environment (by affecting atmospheric processes and climate).

Climate Change
Recent evidence suggests that the Earth, now passing 390 ppm CO2 in the atmosphere, has already transgressed the planetary boundary and is approaching several Earth system thresholds. We have reached a point at which the loss of summer polar sea-ice is almost certainly irreversible. This is one example of a well-defined threshold above which rapid physical feedback mechanisms can drive the Earth system into a much warmer state with sea levels metres higher than the present.

Ocean acidification
Around a quarter of the CO2 that humanity emits into the atmosphere is ultimately dissolved in the oceans. Here it forms carbonic acid, altering ocean chemistry and decreasing the pH of the surface water. This increased acidity reduces the number of available carbonate ions, an essential ‘building block’ used by many marine species for shell and skeleton formation. Beyond a threshold concentration, this rising acidity makes it hard for organisms such as corals and some shellfish and plankton species to grow and survive.

Freshwater consumption and the global hydrological cycle
The freshwater cycle is strongly affected by climate change and its boundary is closely linked to the climate boundary, yet human pressure is now the dominant driving force determining the functioning and distribution of global freshwater systems. The consequences of human modification of water bodies include both global-scale river flow changes and shifts in vapour flows arising from land-use change. These shifts in the hydrological system can be abrupt and irreversible. Water is becoming increasingly scarce – by 2050 about half a billion people are likely to be subject to water-stress, increasing the pressure to intervene in water systems

Land system change
The land is converted to human use all over the planet. Forests, grasslands, wetlands and other vegetation types have primarily been converted to agricultural land. This land-use change is one driving force behind the serious reductions in biodiversity, and it has impacts on water flows and the biogeochemical cycling of carbon, nitrogen and phosphorus and other important elements. While each incident of land cover change occurs on a local scale, the aggregated impacts can have consequences for Earth system processes on a global scale.

Nitrogen and phosphorus flows to the biosphere and oceans
The biogeochemical cycles of nitrogen and phosphorus have been radically changed by humans as a result of many industrial and agricultural processes. Human activities now convert more atmospheric nitrogen into reactive forms than all of the Earth’s terrestrial processes combined. Much of this new reactive nitrogen is emitted to the atmosphere in various forms rather than taken up by crops. When it is rained out, it pollutes waterways and coastal zones or accumulates in the terrestrial biosphere. Similarly, a relatively small proportion of phosphorus fertilizers applied to food production systems is taken up by plants; much of the phosphorus mobilized by humans also ends up in aquatic systems. These can become oxygen-starved as bacteria consume the blooms of algae that grow in response to the high nutrient supply. 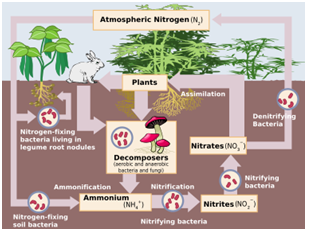 Atmospheric aerosol loading
An atmospheric aerosol planetary boundary was proposed primarily because of the influence of aerosols on Earth’s climate system. Through their interaction with water vapour, aerosols play a critically important role in the hydrological cycle affecting cloud formation and global-scale and regional patterns of atmospheric circulation. Humans change the aerosol loading by emitting atmospheric pollution (many pollutant gases condense into droplets and particles), and also through land-use change that increases the release of dust and smoke into the air. Shifts in climate regimes and monsoon systems have already been seen in highly polluted environments, giving a quantifiable regional measure for an aerosol boundary.