On Friday, when I attended Reap Benefit’s session held by Shashi Sir to get an insight about what we were going to do the very next day in Nallurhalli Government school, I didn’t know that I was preparing for one of the best encounters ever. We had a session on rapid prototyping, where we analyze the problem and try to find a solution by a practical approach. It was an interesting session. In the other half of the session, we discussed the problems faced by the students in the Nallurhalli government school and divided ourselves into groups. We were really excited and enthusiastic about the session on Saturday and we tried our best to find solutions to help the government school students. 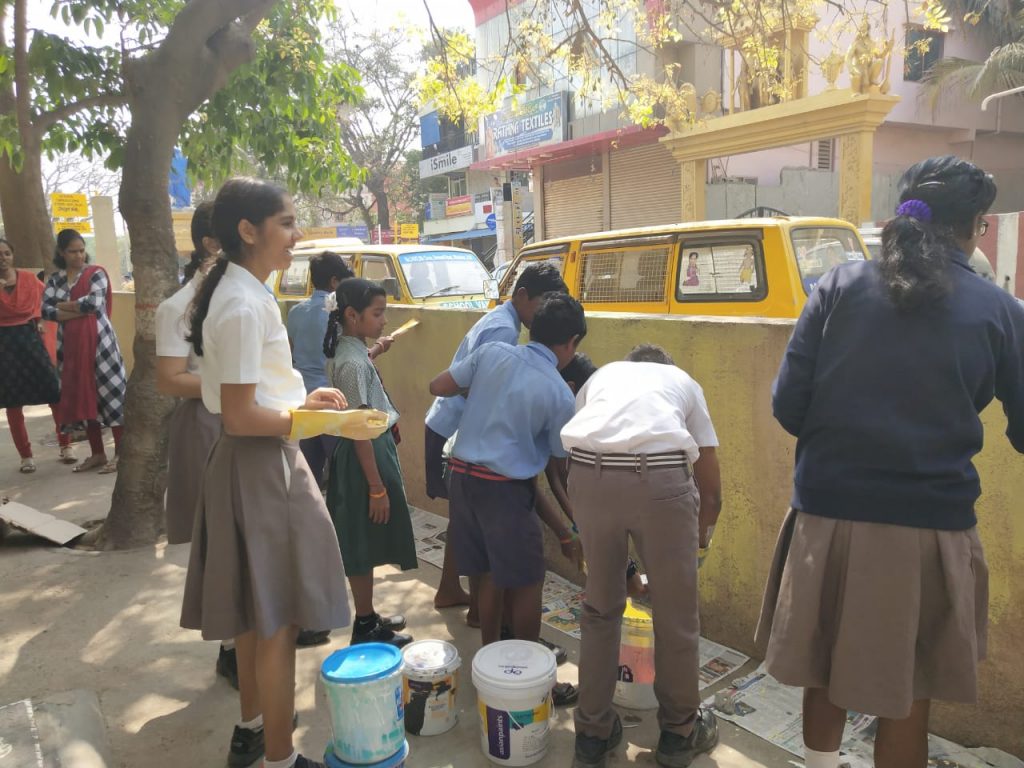 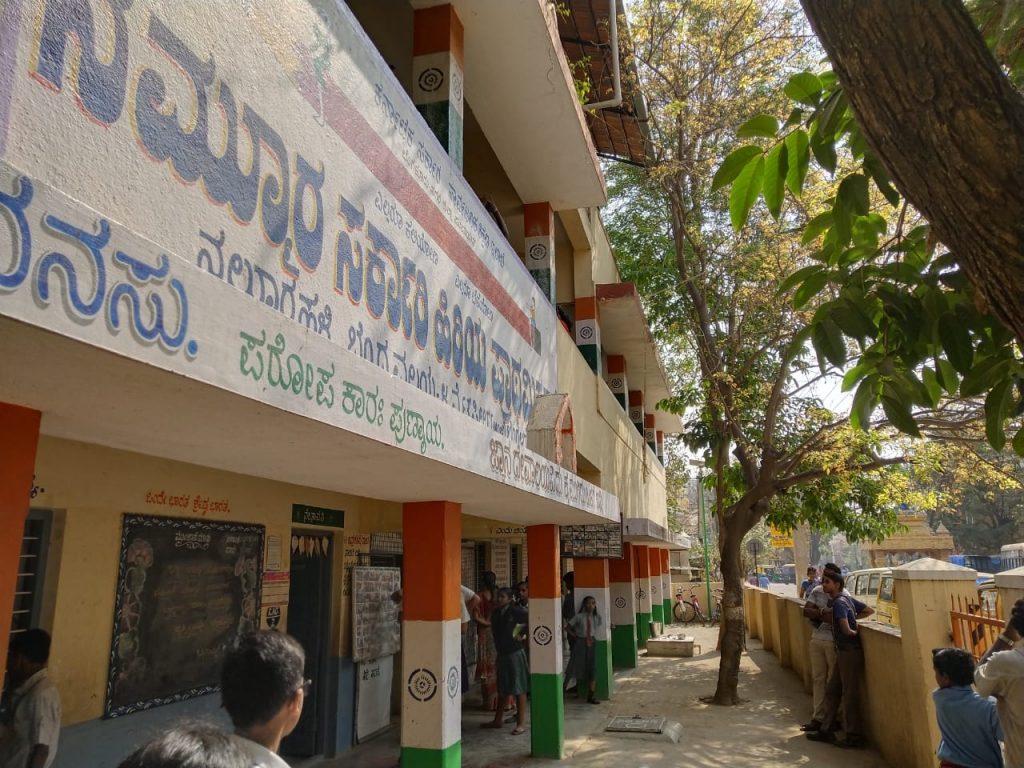 On Saturday, when we boarded the bus we were really excited and also a little apprehensive. After some time we pulled up in front of the government school which was a small two-story building which had Kannada writings and drawings all over. Each floor had 3-4 classrooms with about 20 students in each. Overall the school was much cleaner than I had expected it to be and the children were really excited and happy to see us and were waving at us from inside the classrooms. They were neatly dressed and disciplined, contrary to what I had imagined them to be. Then we divided into groups, which included two of us from CMR and 3-4 of the government school kids. We had a small interaction with them, they were really sweet and humble and they were also happy and grateful with everything they had. 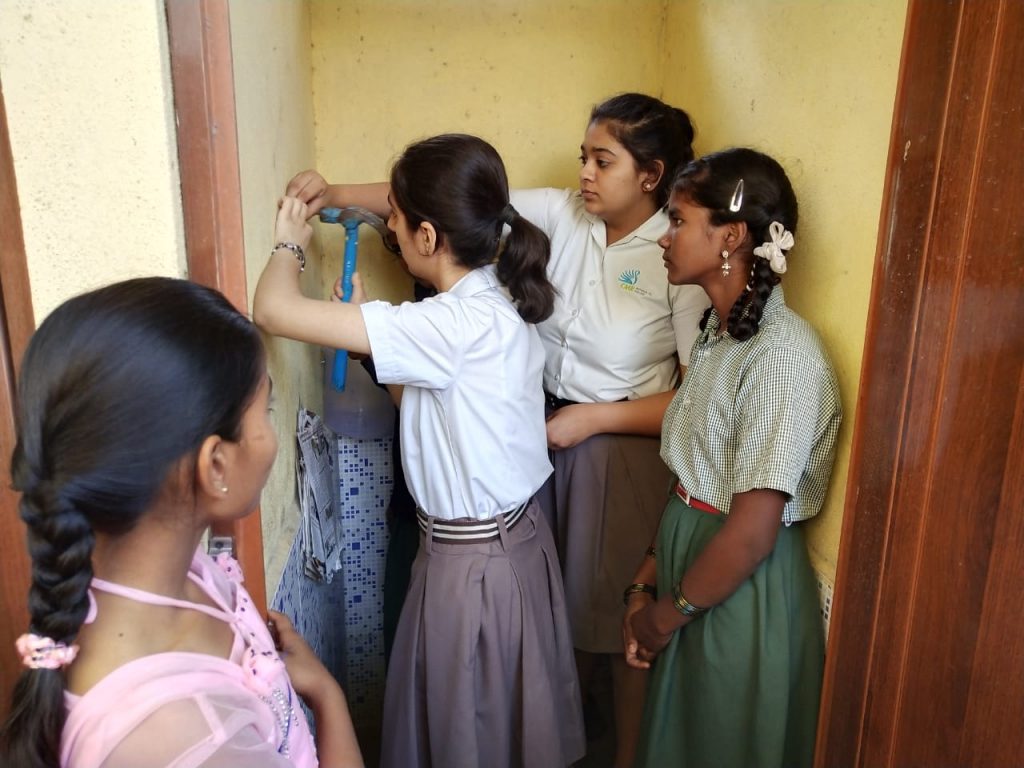 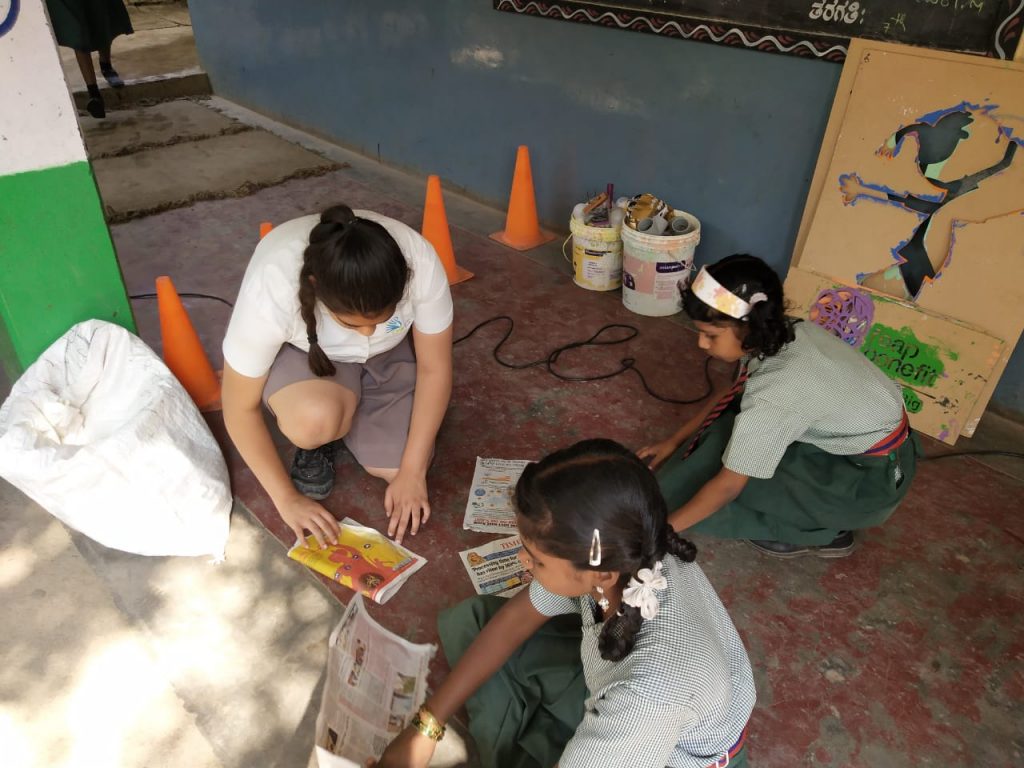 My group included myself, Anusha and 4 boys, Surya, Krishna, Hanumantrai and Darsappa. They were interactive, we talked to them about their daily routine and it was a little different from ours as their routine doesn’t include any gadgets, they usually go out and play and then go to tuitions or self-study at home, they also like studying. We also asked them about their ambitions and they either wanted to serve the country or to play as sports players for the country. Talking to them made me realize how we don’t value what we have and how we should be forever grateful for everything we have and always stay humble and down to Earth. Later on, all the groups were given different problems and some time to discuss, to how we can solve those issues. Our group had to paint the compound walls. The boys were really enthusiastic and excited. The students weren’t very conscious and readily posed for pictures and them. In fact, they asked to get clicked. 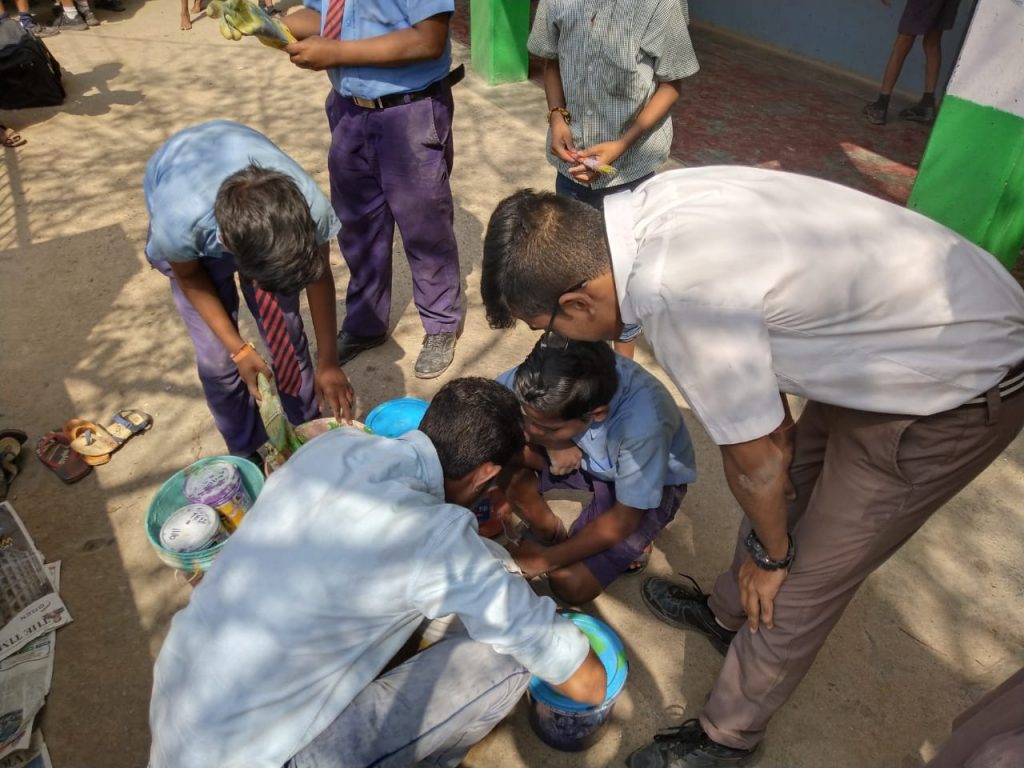 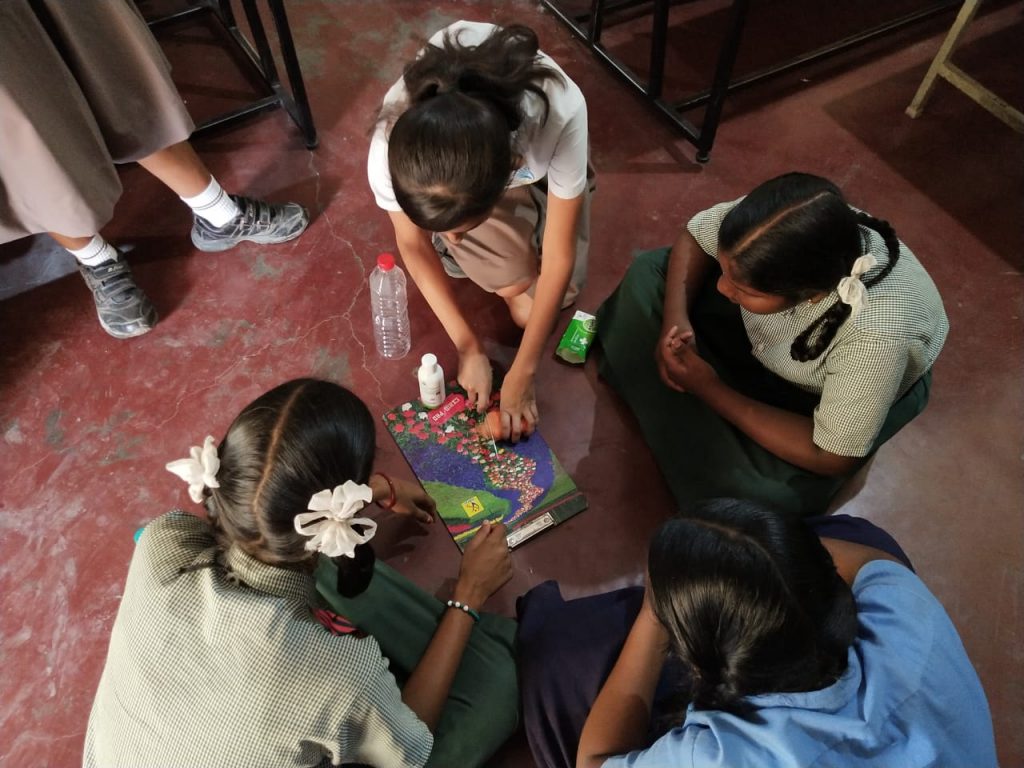 The boys were really ebullient and were eagerly waiting for us to give them instructions so that they could start painting. It was really a fun experience painting. They were also very sensitive regarding the garbage thrown by people in front of the school and requested us to write, paint the prohibition on the wall. We were 2 teams together who painted the walls. The other teams were working in the other problems such as sanitation, dustbins, hand wash, fixing of the leaking pipes, water less urinal for the boys’ washroom and fixing the latches for the girls’ washroom. 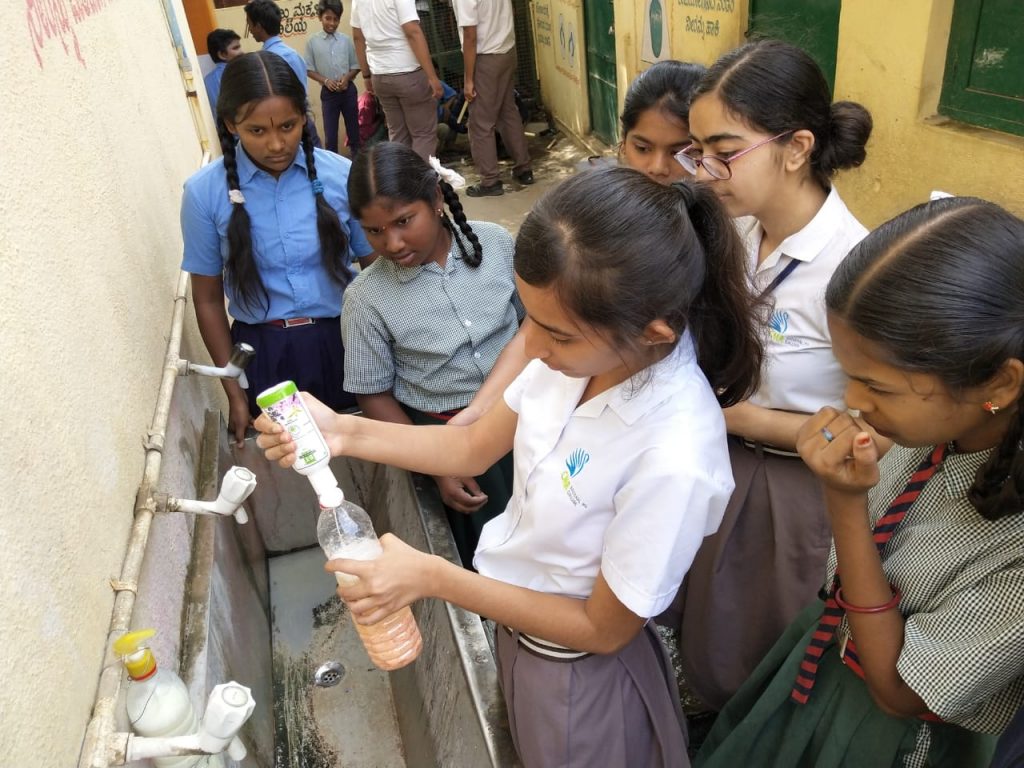 We had our final session where both CMR students and the government school students shared how we felt and what we had learned. It was a really good and satisfactory feeling that we too can make a change in someone else’s life with a small effort. Overall it was an amazing experience and I regret not joining reap benefit from the start, however, I am glad I didn’t miss the opportunity this time and I am eagerly waiting for the future sessions.